How does a string instrument work- “Why are they all different?”

When a note is played on a bowed instrument, the action of the bow on the string sets the string vibrating harmonically. That means the frequency spacing between the harmonics is equal to the frequency of the fundamental. The strength of these string harmonics is not fixed. They are dependant on several factors: The design of the string itself, the bow pressure, bow speed, position of the bow- and finger contact on the string. The skilled musician has considerable control over the relative strength of these string harmonics. The sound produced by the string itself is almost inaudible. The body of the bowed instrument provides the amplification of the string vibration, which is transmitted by the bridge. Resonances are strong vibrations that occur in all objects when subjected to some force. For example when one taps an “a” 440Hz tuning fork, the legs of the tuning fork start to bend back and forth, they do this 440 times every second. A tuning fork has very few resonant frequencies, whereas bowed instruments have well over one hundred resonant frequencies. When the string is bowed and one of the harmonics of the vibrating string coincides with a resonance of the violin, then that frequency will be amplified. Here lies the difference for example between a hifi amplifier and a bowed instrument. Whereas an ideal hifi amplifier amplifies every frequency identically, an instrument amplifies selectively at its resonant frequencies. The musician has no control over the resonant frequencies of the instrument body which are fixed, only over the vibrating string. Every Instrument possesses its own combination of resonant frequencies, the reason why every instrument sounds unique and each tone builds itself in a different harmonic structure. 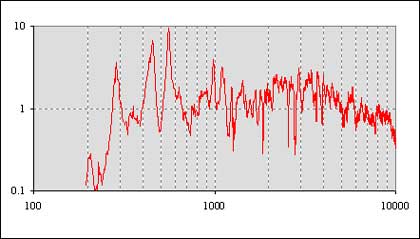 Description picture: One can see that the strengths of the instrument resonances are very varied; for example there are strong resonances at around 270Hz, 450Hz and 550Hz. That means whenever a harmonic of the vibrating string vibrates at these frequencies, it will be strongly amplified. On the other hand there are no resonances of the violin body at 500Hz, which means that any string harmonics of this frequency will not be amplified by the instrument body.

In our workshop we have introduced several modern technologies that help us to discover more about instruments. Modal analysis is the process of identifying the dynamic properties of objects. Using equipment in our workshop, we take dynamic measurements of instruments and process them using self developed computer software. By being able to see exactly how an instrument bends and twists at every resonance in slow motion on the computer monitor, we gain an insight of how modifications could be made to change the sound. Modal analysis is a very powerful tool, as the resonances of an instrument are the reason for its tonal characteristics.
Visualizing the sound- radiation and intensity produced by instruments in the form of frequency spectrums is an effective addition to listening to the modifications made to them. We have built equipment that enables us to make these measurements and process them using computer software developed in our workshop.

Vibrato adds fullness, interest and volume to the musicians tone. Some violins are better adapted to producing a good vibrato effect. To see why, we must first understand what happens when a musician uses vibrato. We have already seen, in the article above, that only those harmonics of the vibrating string which coincide with body resonances are amplified because of the unique and irregular structure of the frequency curves of bowed instruments. Each instrument and indeed each note has its own character because the fundamental and all harmonics of each individual tone are lining up at different places of the fixed resonant curve of the instrument body. When the musician uses vibrato, he alters the frequency of the fundamental and the entire harmonic structure of the musical tone he is playing, the higher harmonics being shifted in frequency more than the lower harmonics. These rapidly altering frequencies can be thought of as moving up and down the frequency axis of the resonance curve, sometimes coinciding with a body resonance and sometimes not. This has the outcome of the vibrato being not only frequency modulated, but also amplitude modulated. Those instruments with a very varied structure in their resonance curves will have greater amplitude modulation and thus a fuller, richer more voluminous vibrato tone.

String instruments should possess in our opinion at least six important characteristics to be classified as a concert instrument that could be used from chamber music to virtuosic solo concerts.
Projection:
The first condition for a concert instrument is that it should be able to project its sound into the farthest corner of the concert hall playing with a full orchestra.
Tone Quality:
Tone Quality and tone colour is paramount to reach both player and listener in an emotional way that creates feelings listening to music and helps the player to express himself, to communicate and show music.
Dynamic range:
To help an artist further to fully express the emotional content of music a concert instrument should possess large difference in musical power between fff and ppp. Important here is that the piano sound is not a quieter repetition of the forte but has its own quality.
Articulation:
Virtuosic and rapid passages of solo concerts are the most enjoyable, when the listener is able to hear the various tones as individual ones. Clear articulation is most important for the player to show complex and delicate structures in music.
Response to vibrato:
The expressiveness of an artist tone depends greatly on his vibrato. Playing vibrato must enable to create a larger variety of tone colours and sound volume.
Set up – ease of playing:
Paramount for the player is the ease with which he can produce the sound and the sound that the player experiences aurally and through bodily contact with the instrument. Set up details like bridge, sound post, bass bar, elevation and strings etc. have an enormous effect not only to assist the ease of playing. Set up is a powerful tool to help an individual player to get the most for himself from his instrument in his subjective way.
All the above described characteristics are interrelated and only fully understandable if one knows what happens when the musician plays his instrument. (see also article:”How does a string instrument work?”- “Why are they all different?”
The sound experienced by the musician in a string instrument concert is an amalgamation of the player’s bodily contact with the instrument, the sound sensation he feels “under the ear” and the unique dynamic properties of his instrument. The aural experience of the listener, to any one note played on the violin, is the result of the musician’s ability to induce her musically defined intent unconsciously, as harmonics in the vibrating string which are amplified by the fixed resonances of the violin. Every violin is a unique collection of resonances. A resonance is a strong vibration at a specific frequency in the violin. Violins have many resonances of different characteristics.